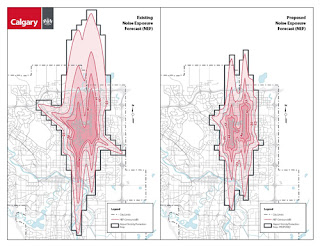 The City of Calgary council and administration have made some changes to the way the City is enforcing the Alberta Airport Vicinity Protection Act (AVPA) in some areas of the city, which are in zones with Noise Exposure Forecast (NEF) levels between 30 and 35.

As initially envisioned, and set down in the Alberta Government AVPA for the Calgary International Airport in 1988, construction of residences, schools and day cares were prohibited in this NEF zone. However, several pre-existing residential areas of the City fall within these contours. These include the communities of Inglewood, Vista Heights and Mayland Heights.

The changes are intended to allow for increased population density and redevelopment in the affected communities. The regulation changes allow modifications to existing structures and subdivisions of properties, subject to the acoustic requirements of the NEF designations. These requirements are quite strict and govern the noise protection to be provided by the exterior structures of the buildings. Windows are typically the weakest part of the exterior structure. (Refer to the Alberta Building Code for details.)

The City has also proposed changes to the original NEF contours which were developed in 1979 and codified in the 1988 Acts for several airports in Alberta. The proposed revisions are intended to account for improvements in aircraft technologies (newer aircraft are substantially quieter than the older generations) and operating practices. These revisions have not yet been approved by the provincial government.