Noise versus Development: Residents and Regulators Caught in the Middle 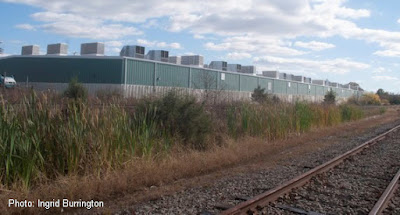 As urban areas and associated infrastructure/industry continue to increase, expand, and get closer to residential areas, the need to consider the acoustic compatibility of adjacent land uses becomes more apparent.

There have been recent examples of unregulated sound sources affecting residents, as reported in the Calgary Herald* on Monday, September 19, 2022.

The article reported that near Manassas, Virginia (USA), there is a large and growing concentration of facilities housing servers for cloud computing. They require substantial air-conditioning (AC) equipment to keep the servers within allowable temperature limits for operation, along with large banks of backup power generators—both high sound-generating equipment items.

For context of scale, the cumulative power requirements of the data centres in northern Virginia are roughly equivalent to the entire output of the North Anna Nuclear Generating Station and similar equipment. So why not regulate the sound from it?

In Prince William County, Virginia, the local ordinance specifically exempts air-conditioning sound from its limits, due to the warm climate.

There are now many complaints and protests organized to object to the constant whirring sound of the AC fans, especially the tonal components of which are irritating to residents.

Regardless of the local ordinance exemption, the local Amazon Web Services facility said that it has made it a priority to address the sound concerns of neighbours and is installing acoustic shrouds at this site to mitigate the situation.

Retrofits of this kind are usually more expensive and compromise efficiencies of the equipment, compared with assessing sound prior to construction and including appropriate mitigation into the design. Also, complainants tend to have a heightened sensitivity to sounds they have complained about, often requiring heightened control measures compared with having controls put in place during construction.

These kinds of uses are starting to appear in Alberta. So, let’s look there for a second.

Is it appropriate that only energy and utilities industries are regulated for sound in Alberta and other industries are not? This means that sound from mining and minerals, manufacturing, data storage/communications, waste transfer, entertainment, and leisure uses, to name a few, are not typically proactively assessed or regulated. Even assessments of the sound generated from these uses, including transportation (let’s ignore rail for now in most locations😉, although in recent years the City of Calgary has required inclusion of rail noise in traffic assessments) in many cases, are typically not required by municipalities to inform a decision in order to grant the development permit. This means that we’re not assessing the risks in terms of sound and appropriate mitigation, in many cases, and just letting things “land as they may.”

Is it best to “just build it and see how we get on with complaints”?

Noise complaints are on the rise, which is showing that effects are already apparent. An article published as part of International Noise Awareness Day around data in the US (regulations for sound are not too dissimilar to that in Canada) concluded that, “Commonly only 5 and 10 percent of residents exposed to noise actually complain or participate in any related activity.” That’s an overwhelming percentage of people who don’t complain who are potentially affected. Some will think that complaining won’t bring change, others may think that’s the way it is, or various other reasons.

The Bylaws are typically enforced in reaction to a complaint, rather than the proactive assessment and control of sound to prevent effects on residents. The language in Bylaws is often too general, contradictory, and outdated compared with the industry-regulated approach to assessing sound in Alberta.

There are similar situations in other provinces in Canada, too. Alberta has been given merely as an example.

A typical statement in a Bylaw is

“…No person being the owner or occupier of real property knowingly shall allow or permit such real property to be used so that noise or sound which emanates therefrom, disturbs the peace, rest, enjoyment, comfort, or convenience of any person or persons in the neighbourhood or vicinity.” There are also many Bylaws that don’t even mention sound.

Sure, these can be relevant to urban areas with higher ambient sound levels, but this is not the rule for all situations. Ambient sound levels can be lower within the municipality/county, especially larger and more diverse ones, in terms of distribution of sound sources. This could underestimate the effects on residents.

Sleep disorders and related health effects have been linked to sound level, and related annoyance, in various research conclusions.

So, should we do more? 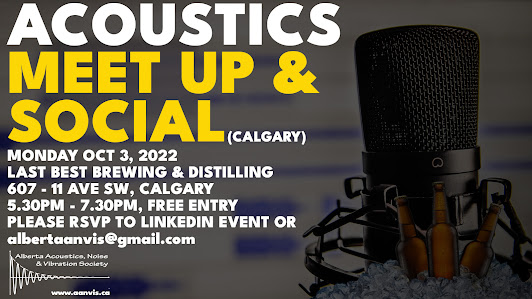 We had so much fun at the last social in Calgary that we just couldn't wait to have another one! RSVP to AANViS on LinkedIn at https://www.linkedin.com/events/aanvis-albertaacousticsmeetup-s6978808219473190912/comments/ or directly to AANViS at albertaanvis@gmail.com.

Let's Get Social in Edmonton

After the success of our Calgary social event, we wanted to make sure that our members and potential members in the Edmonton area were not left out. We look forward to seeing you live in September! 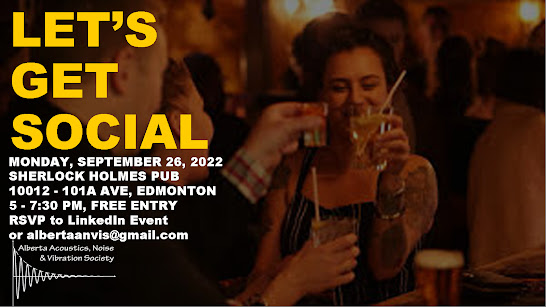